Technology Innovation. Made in Germany. 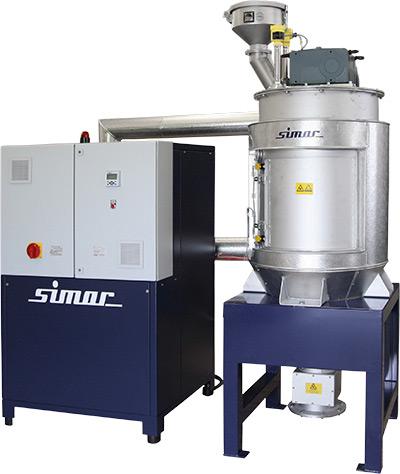 PET - a semi-crystalline thermoplastic - is used in the production of high-quality bottles, films, fibres, tapes and other products. Depending on its subsequent use, its hygroscopic characteristics mean that this material must be dried at a temperature of 130°C to 180°C over a period of 4-6 hours before being thermally processed.

PET can be found in various structures, crystalline, partially crystalline or amorphous. This material is usually amorphous when found as a re-granulate, film shreds or bottle flakes. During drying, a temperature of > 80°C produces a structure change from amorphous to crystalline.

Once this glass transition point has been exceeded, the material becomes soft for a short time; it changes from transparent and shiny to milky white and matt. Especially disruptive in this process is its more or less strongly adhesive properties which would result in clumping during the drying in the drying container and disrupt the production.

This problem is solved by the upstream connection of a crystalliser. Using a stirrer in the crystalliser prevents agglutination and clumping during the change to the crystalline structure. The subsequent drying can be performed in a conventional drying container without any restrictions